I’m so happy to finally share this recipe here! I’ve been working on making a gluten-free puff pastry for the past 3 months. And after a lot of trials and errors, I did it! I made gluten-free puff pastry and it’s better than any store-bought puff pastry that I’ve tried! Plus it is very simple to follow. If you have ever thought that homemade puff pastry is something that you need baking skills to make, you are wrong. This is one of the easiest doughs that you can make, the only thing that gives puff pastry its reputation for being difficult is that it takes time. But that’s as complicated as it gets!

This puff pastry is flaky, buttery, crunchy on the top, soft in the middle, flavorful and so delicious! It’s SO GOOD, you can’t even tell that it is gluten-free!

It goes great with both sweet and savory fillings!


How to make this gluten free puff pastry?

Puff pastry is in the category of doughs called “laminated” doughs.  This means it is made up of layers.  Laminated doughs involve three steps:

1. Preparing a base dough détrempe;  this is usually made of flour and ice-cold water. However, because gluten-free flour makes the dough tear I added lactose-free sour cream. Sour cream gives moisture and contains fat, which works perfectly with the gluten-free flour.

2. Enclosing fat beurrage (“butter packet”) inside the dough; this is essentially a fat pocket that gets folded in the dough.

3. Rolling, folding, and layering the resulting dough; After you enclose the beurrage in the détrempe, you then roll and fold the dough several times to create layers of dough separated by layers of butter. The fold is a key step to making puff pastry.  You roll and fold the dough several times to make layers. There are two types of classic folds used in puff pastry.  I like to use the “single” fold in which you fold the dough as you would a letter. The other type of fold is called “double” or “book” fold.  This type of fold accomplishes twice the fold (hence the name) as the single fold.

To find the exact amount of the ingredients and step-by-step instructions, scroll at the end of this page.


what flour to use to make it?

I like to use my universal homemade gluten-free flour blend. Which is a mix of the following flours :

4. Tapioca Flour (tapioca starch is the same as tapioca flour)

If you can’t make that one, you can try with any gluten-free flour mix (just make sure it contains xanthan gum because that helps in binding the dough). The final result using different flour mix might vary slightly, depending on what flours your mix contains.

To find the recipe for my gluten-free flour mix click, HERE.

*To make sure that your flour mix is fodmap friendly I recommend that you make your own gluten-free flour mix, I always make this one. Or always read the ingredients of the store-bought gluten-free flour mixes. Make sure your mix doesn’t contain soy flour, chickpea/besan/gram/garbanzo bean flour, lentil flour, coconut flour, amaranth flour, or lupin flour.

*As a general rule always read the labels of the ingredients that you use as there can be sneaky FODMAP’s in any product. To educate yourself of which foods are high in FODMAP’s I’d strongly recommend downloading Monash Unversity FODMAP Diet App 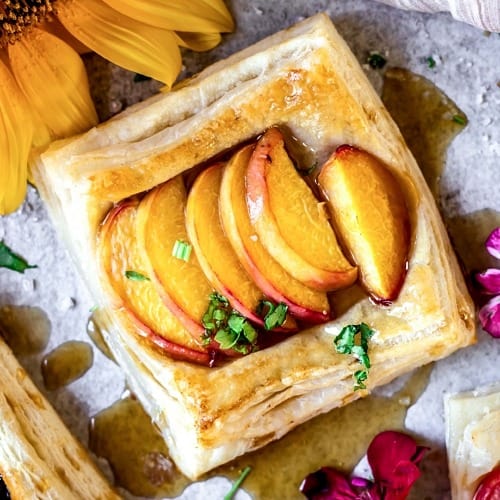 For the butter packet

To make the dough

To make the butter packet

Gluten Free Stories is a place where you can find simple and delicious Gluten Free and Low FODMAP recipes. Read More…